Santiago Martin, a 10th-grade student at the Rochambeau French International School, recently completed a two-week internship with RMI. During that time he researched companies and interviewed RMI Board members representing various employers in the state. Since Santiago does not drive, all but one interview was by phone. He visited Holmatro and met with RMI Board member John Freeburger, Vice President for Manufacturing at Holmatro USA. Below are his insightful and fascinating report from Holmatro. Santiago was referred to RMI by a representative of Local Motors who attended the May 3rd Techtonic Shift event.

Today, I visited Holmatro’s facility in Baltimore, Maryland and met with John P. Freeburger, the Vice President for Manufacturing. I arrived about ten minutes before the scheduled time of 10:30 am, so I sat down and observed the rescue tools they had displayed on a big table at the entrance. Soon after I arrived, John came to greet me along with one of his colleagues. I shook hands with both of them, and John and I promptly headed to his office for the interview. I was surprised to see that on a chair, John had set a bag for me filled with Holmatro safety glasses, a booklet, a pen, a Holmatro cap, and toy pick-up truck labeled with the Holmatro logo. It reminded me of the “goody bags” you’d get at the end of a birthday party when you were a kid; however, this was no birthday party, I was interviewing the VP of manufacturing of the number one rescue tools manufacturer in the world. We both sat down at a small table next to his big desk and began chatting.

John first told me about the company’s history. Holmatro was founded in the Netherlands by a remarkable man named Rudy Wessels in 1965. Rudy, as John told me, was a very attentive guy and a great boss in his and everybody else’s eyes. He’d stop by the office once every couple of months and every time would greet all of his employees with the same glaring smile. John went on and on about Rudy’s great memory and down to earth attitude. He knew all of his employees and spoke with them any chance he got. In addition, no matter how long he was away, he’d always pick up the conversation right where he had last left off with all of the employees. John told me about how he was once in a meeting and, out of nowhere without a care in the world, Rudy poked his head in through the cracked door with what John called his “signature move” and he just said, “John?” At that moment he knew that it was his cue to go and chat over lunch or coffee with his boss. John made it very clear that Rudy loved his job and that he surrounded himself with great people. He, unfortunately, passed away a couple years ago, but I could tell that he had left behind a legacy and that he truly immortalized himself in the fond memories of his employees who he care for so much. John clearly follows in his example as he is familiar with all 68 employees in the facility and makes the work environment at Holmatro feel less like a job and more like a fun experience with great people. Evidence for this is the fact that the last people to have left Holmatro on their own behalf had left for retirement. I met several colleagues of John over the course of my visit and they all seemed like great people with excellent work ethic, who loved their job.

We then moved on and started talking about the key technologies used by Holmatro. They mainly use CNC machines, which stands for Computerized Numerically Controlled machines. CNC machines are automated and, once installed, can execute hundreds of orders in under an hour, only requiring occasional supervision from an employee. CNC machines essentially turn several machine into one that uses “progressive machining”. That term means that one machine is able to execute multiple phases of operation for a part, rather than having several machines, with each one executing a different phase. For example, Holmatro uses a DMG mori DMU eVo 60, it is a five axis milling machine they installed a couple months before my visit and John explained how it reduced the time it took to work on a part by about 40 minutes to an hour, which if you multiply that by the hours and days it is left running, makes a notable difference. DMG mori is one of the largest German manufacturers of CNC milling machines. Next, he mentioned how vital an ERP computer system is to a company. ERP is an acronym for enterprise resource planning. It is a shared database, supporting multiple functions used by different business units, that stores, filters, and provides information for all employees in the company, as stated on Oracle’s website. By having all the information necessary to a company stored into one big system, finding any specific bit information becomes much easier. Additionally, all the machines are connected to this system, meaning that the status of every individual order or part can be tracked and located by anyone in the company at any given moment. John explained it as “saving time, where if you need info, it’s all there.” One thing he told me which I found interesting is that “communication is key to the success of any company.” This is when mentioned Jessica Beyaerts. Jessica is responsible for the ERP systems in all three facilities, the one in Netherlands, which is the headquarters, the one in the US, and the one in China. John described her as a truly remarkable worker. He said she knew her way “in and out, left to right, and top to bottom” of the system. She controls and checks all of these computer systems from her desk in the Netherlands.

I then asked John how he stays updated on the latest technology and how it is used. He told me that he always attends IMTS or International Manufacturing Technology Show, which happens every even year and is one of the biggest tech shows in the country. He also always flies to Europe to attend EMO or European Manufacturing Organization, which happens every odd year and is the biggest tech show in the world. He also mentioned that being part of big networks of people such as RMI gains him a lot of exposure as to who is using what new technology for which purpose. Along with attending tech shows, John loves to visit other manufacturers’ facilities, regardless of what they produce; it could be clothes, food, instruments, cars, robots, you name it. He told me about how he discovered that now the shoe industry is using 3D printers for the soles of shoes. Something he said which I retained was that “it’s impressive the way they apply technology”. He gave me the example of how they used a machine that used to make bras to instead fabricate parts of their shoes. It’s all about innovation as he said. This is where the term “speed to market” comes into play. Repurposing technology in smart and innovative ways is key to increasing productivity.

Before beginning the tour of the facility, I asked John about what obstacles he’s run into as a manufacturer and what concerns he has with the evolution of technology. As of now, money, fortunately, hasn’t been an issue when trying to upgrade to a new machine; however, if he were to run into that problem, John told me he could rely on the sister company in the Netherlands to take their orders for them, since they manufacture the same parts. He mentioned that correspondence is daily between their sister company. Two concerns that he shares with the other manufacturers I’ve spoken to are, on one hand, the lack of people willing to work the rather unskilled jobs in manufacturing, and on the other hand, the lack of people qualified to work with the more complex machines that come out every year along with hundreds of others. As of now, it’s rare to find young people who are interested in manufacturing, as he said. The only viable solution for the first concern is replacing those jobs with a machine. As for the second, it is up to “Generation Z”, he said, to look more into the manufacturing industry because it is the backbone of all mass-produced products in the world. 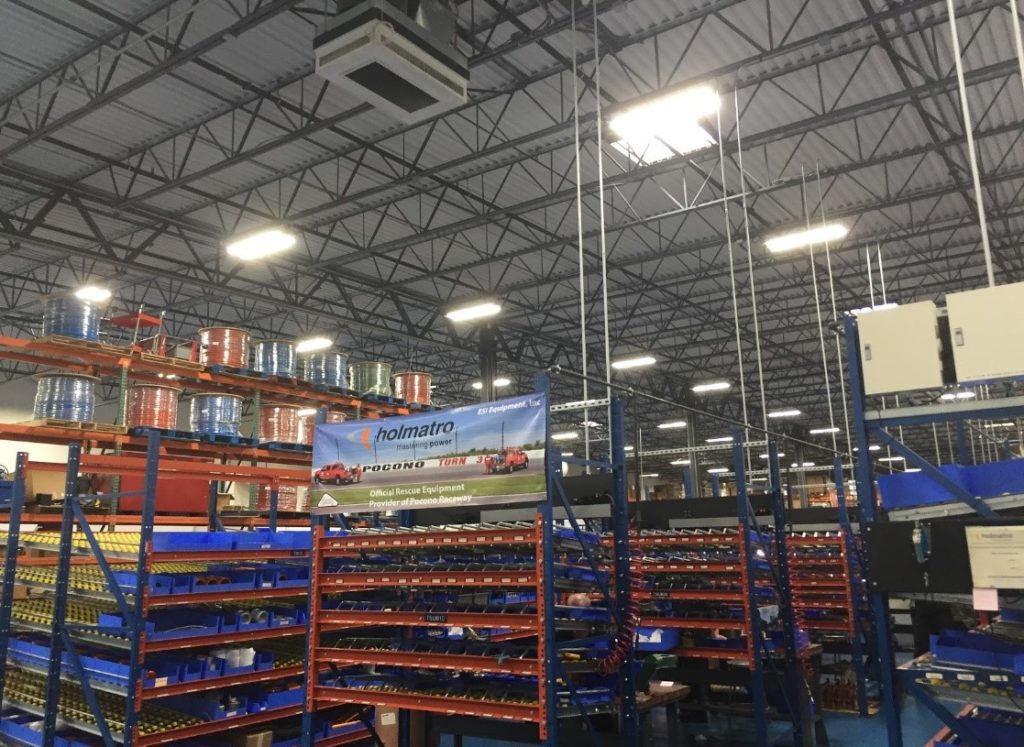 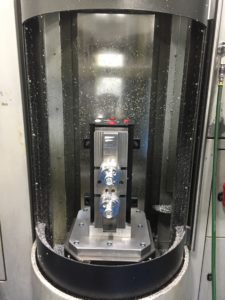 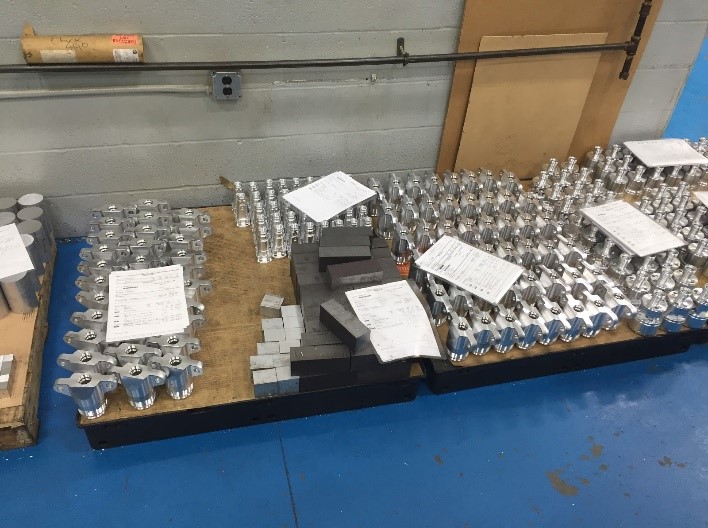 When we finished with the questions, the tour I’d been eagerly been awaiting was about to begin. I will never forget the surprise of the sheer size of the whole production area. One second I was in a hallway

full of offices and meeting rooms, and the next I was in a massive warehouse filled with loud machines, storage shelves, and assembly stations. As we moved through the machines, I was introduced to everyone working each individual post. We first stopped at the DMG Mori eVo 60, which I mentioned earlier. It is an impressive five-axis machine that at the moment was working on several parts. It turns small blocks of metal into polished parts with drilling measurements precise the millionth of an inch. Next, we went to these extensive shelves, filled with parts. These shelves were part of what’s called a pick light system. Each section contained parts that contributed to a different phase in the assembly of the final product. Using the ERP system, one specific box in each section of the shelves would light up, indicating which part to take. Once you pressed the “confirm” button, a specific box in section 2 would light up to indicate the next part to take, and so on. All of this was astonishing to me as I’d never been inside a manufacturing facility, so all of these systems were very new to me. The more people I met and the more machines and acronyms John explained to me, the more I was excited to see what next he had in store for me to see. We finished the tour with him showing me the shipping and packaging section. It was all layers upon layers of boxes, containing several assembled rescue tools, which could end up anywhere in the world.

To conclude the visit, after an amazing tour of the facility, John invited me to eat with him in the cafeteria, where we spoke for about an hour over Chinese take-out. He told me about his first job as an eight year old, when he got paid $65 to clean a guy’s plane, which he saw him fix over the span of two years from the other side of the fence of a huge airfield, where people left their planes and cleaned them, or fixed them. He’d ride down there on his bike and see the planes take off and land, the dream of any eight year old. The incredible part of this story was the fact that after a while of cleaning his plane, the pilot let John ride in it with him while he practiced his tricks for the next airshow. It must’ve been a surreal experience, especially for someone that young who originally just planned on watching planes come and go, or anyone for that matter. After chatting for a while, John receives a call that he has a meeting and that’s where we stop. Not only had I gotten to see what it’s like inside of a huge manufacturing facility, I had gotten to know the person behind all of it, for which I am very thankful. Before John left to his meeting, we took a picture in front of what was apparently “not even half of what we make here!”, as he said. 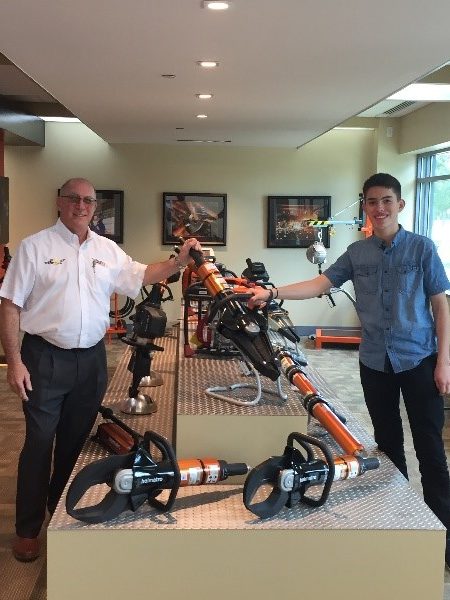